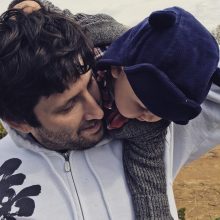 This belt has alluded me most of my life in different forms. In TKD I was denied by my teacher as a young man, maybe 13/14 years old, because I wasn’t coming in enough. I was previously training 3xs a day, weekly for years, sparring with grown men since I was a small child. Not for points but for KO’s. I was brought up in front of my friends and their families during a promotion and had my teacher air out that I was unfocused and unworthy of black belt rank due to my parents getting divorced. I stood at attention with a quivering lip and tears rolling down my face as my teacher explained to all in attendance something that was killing me inside. With a dead silence and all eyes in the room gazing at me I was further belittled for being weak for showing emotion. I was devastated. Needless to say I never went back.

I started Jiu-Jitsu with hate in my heart. The Gracie’s were releasing videos of them beating up all of the people who reminded me of my old instructor. All the high kicks, board breaking, “secret techniques”, and X-ray paper couldn’t help you against The power and rawness of Jiu Jitsu. I wanted to be part of that example.

Chasing my BJJ black belt I have had ups and downs, struggles and defeats, AMAZING victories and even a close repeat to my original experience in martial arts described above.

This particular black belt I chase has changed looks as the years have passed. As a 22-year-old man I started looking to get some sort of cosmic revenge against my first teacher, anyone who trained anything else besides jiu-jitsu, as well as the people who bullied me in high school. Shortly after beginning, black belt became a symbol of just how hard I could be. How far I could push being a fighter and how much damage I could do to another human being with ease. I later started to not only want to be the best against the world but also against others who trained jiu-jitsu. As I aged The idea of black belt then changed into a symbol of the respect I would demand from my peers and teachers and anyone else that was watching. I wanted to show the world my art as my friend Marcos would say. Black Belt became something that upon receiving, I would show an old BJJ team and coach that I would be better than they could have ever imagined me to be and regret losing me as a team-mate and student. That shifted into wanting a black belt as a sign to myself that an unconfident asthmatic could become a champion fighter and sponsored athlete. It would show respect and gratification to myself and not others anymore. The goal of black belt morphed into me wanting to be a great teacher helping others grow into amazing confident people. No more vengeance, no more proving anything, no more selfishness. Instead, paying it forward and helping others achieve their goals. That has been the longest running theme until very recently…..

Often times I wake up and spend my day in pain. I am riddled with injuries from over 16 years of daily intense training, fights and competitions in Jiu Jitsu alone. I have chosen to train at what I feel is the toughest jiu-jitsu school in the world. Marcelo Garcia Academy NYC. I receive relentless beatings from elite high level 20 somethings every class. My own students are savages and are as tough as they come. They offer me no favors and come after me with intent. I  train judo with a 3 time Olympian and her teacher, a red belt in Judo. I also spend everyday with a little pair of eyes watching and studying my every move. My goal of BJJ black belt has ultimately taken on being a symbol of showing my little 14 month old boy about FOLLOW THROUGH. About how no matter how much it hurts you finish. It sets an example of what I expect of him in whatever he chooses to take on in life. It will make him realize that a piece of cloth can be your most prize possession. It will show him that anything is possible. I hope it will show him that the hard path is the one worth doing. That there are no short cuts in life. I hope it will show him that his opinion of me is worth all I will go through to achieve my most coveted goal in my life right now. And that is to receive my black belt in jiu-jitsu.