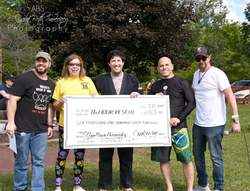 Some of you may know that on Saturday the 8th of September, I set out to raise 11K for a no-kill animal Shelter called 11th-hour rescue. The rules were simple. Go 11 hours in the Gi with no breaks, stream it online, help a great cause.

I had heard about people doing similar things. For example, 24-hour classes where one person is on the mat for the allotted time, but never had anyone, to my knowledge, went straight through. How bad could it be? I mean I had swam across lakes and oceans in endurance races, ran over 2 hours a night for a whole summer to clear my head, had my throat tattooed for 4 hours straight, stayed up for over 72 hours for finals in college…..

Well, let me explain how it went down and what I learned through it all.

The night before I had gotten home from teaching my classes. I was in my routine of going to the grocery store, coming home to my amazing wife and 2 boys, and making something to eat. Lori (my wife) and I had already agreed that she would get up with our newborn if needed, so I could sleep for the following day’s event. I ate a big dinner to finish off about 2 weeks of trying to gain fat to get me through this thing. I started some laundry because I had gone through all of my GI’s that week teaching at my academy, Sakura JiuJitsu. Time is now about 12 midnight. My dryer goes off at around 1:00 and there is a problem. I can’t sleep. I am just sitting there. Not tired, not worried, not anxious. Just unable to sleep. This goes on till about 2:30/3:00. I have to be at the school at 6am to set up and get going by 7.

I finally get to take a nap of sorts and wake up to my alarm. It is 5:00 am. I had gotten 2 or so hours of sleep. Not the good start I had wanted. Snoozing for 30 minutes I finally get up, get my gear and hit the road. The academy is a 40-minute drive.

I get to the school with hardly any time to spare after a delirious drive on long barren highways. It is 6:50, my eyes are burning, and I am just finishing getting my phone and iPad ready to go live. My first person shows up to train.

I had tried to block out times in units of 15 minutes to a half an hour per person. I thought mentally, the first thing I should do is organize my time to perceive it as easy instead of viewing the whole block which seemed overwhelming. the breakdown was 22, 30-minute rounds. We ended up with 27 people to get through over the time span.

The first few rounds were not what I expected. I had eager blue belts for 30-minute slots right off the bat. They were normal rounds in the sense that we were going after submissions. Not the flow rolls I was hoping for but fun none the less. A few rounds in my first black belt shows up and I am already entering into fatigue. The night before starts to creep up and hit me like a ton of bricks. We are exchanging sweeps and positions and mid round my left knee crunches and locks. I have had surgery on my right knee for a similar meniscus injury. The gravity of what I am doing sets in like a storm. I am only in round 3, it is only 8 am, and I am already injured. I pop my knee back, start fighting from half guard and get back to it.

The rounds roll by into 9 and 10 o’clock and they just keep coming with no end in sight. Seeing the next person show up through my lobby window was getting mentally taxing. Opponent after opponent and now, already, dehydration and hunger set in. My mouth is dry, I am having a hard time concentrating, and my stomach is turning and begging for food. I try to quickly get in what I can between rounds only to get sick and uncomfortable from a swollen belly full of water and Pedialyte I sucked down way too fast and gross baby food packets I would try to shove down my throat so I could get into the next session. Exhaustion would come in waves about every 5 minutes or so. I wasn’t thinking about much. Just reacting to what was happening moment by moment. Every now and then I would just look up at the banner that was made for the event by JROD graphics and think….”I won’t let you down.” I had dedicated this event to a good friends mother who had recently passed away. Seeing her name on there definitely helped me through despair at times.

Into the afternoon I went. Friends and support coming and going, classes starting and ending. At this point, I had overheard someone on the podcast (The history of guy stuff) in attendance mention that we had just passed the 2:30 mark. I felt my soul sink out of my body. I was in unimaginable pain from my Gi. The friction had shafed my skin so badly that any time I was touched it was excruciating. My scalp from being rubbed on the mat, my chin, wrists, nipples, knees, shoulders, elbows, and back had skin missing. My back was actually bleeding. My fingers were cramping into my palms and I was starting to get smashed and submitted. My ribs and sternum felt crushed and it was painful to exhale. When someone would pass my guard I would let out a yelp from the pressure. I remember asking my assistant instructor Russ to tell people on deck to chill out because if they kept coming after me I was afraid I wouldn’t be able to finish. I was desperate, super agitated and getting really angry and frustrated at points. It was starting to get hard to control my emotions.

I felt as time was going on I was being stripped down to my first classes as a white belt. I was relying heavily on escapes because I didn’t have the strength to ward off guard passes. I was getting relentlessly mounted and I couldn’t stop it so I started to accept it. I was accepting submissions and positions in a state where I was so tired, and my body had relaxed so much, that I could handle the stretch of a foot lock or arm bar way beyond what I had ever experienced. It got to a point where people couldn’t finish me. It was a very odd but gratifying feeling. Painless at times.

The best techniques to handle at this point in the journey, say at hours 6-8, were mount escape when trapping the arm and foot, closed guard holding the head down with an over hook, knee cut pass when I could get on top, scissor sweep, X Guard and Kimura. Surprisingly, the rear naked choke was terribly hard to finish, and the back was near impossible to control under the circumstances. Leg attacks were not far behind and seemed useless. My hips and legs were too fatigued to pummel. To control a whole human being from the back took an extreme amount of energy as opposed to locking onto an arm with Kimura grip and taking a persons leverage away. Mentally I gained confidence in these techniques as the rounds went on allowing people into these positions just to take advantage and finish. It was amazing to me and shocking at the same time, that you can still be dangerous under extreme exhaustion, injury, and pretty much near death uselessness. A student of mine described me as “feeling like a wet noodle” then submitting him in the same thought.

After 10.5 hours I was in my last round. Whoever was left in the room gathered around shouting out times left. Hearing my son Theo’s little voice while playing on another mat was helping me get through to the finish. I wasn’t about to let him see his Daddy fail. In the final round, the final half hour I was with a teammate of mine from my sensei Marcelo Garcia’s Academy in NYC. Someone described my last partner as “the final boss in a video game.” I was getting smashed. Evan is a big tough competition ready purple belt. I hurt to the touch, my muscles were in a state I had never thought existed, I was missing skin, my knees were swollen and devastatingly painful to bend anymore in any kind of guard, I had no grip strength in my cramped locked back fingers and then I heard “30 seconds!” We started to enter into tournament mode where 30 seconds translates to win or die. I thought “I am going to finish him or I am going to finish this round standing on my fucking feet like a man, but I WILL NOT go out pinned down on my back!!!” The last 5 seconds were counted, and I ended this argues 11 hours on my feet, like the man I want to be. I had used every last bit of energy to get out of a takedown attempt and disengaged the grips. Choking back tears, my son Theo ran over and kissed me. My friends and wife sat my broken body down while everyone cheered and just like that, I did it. 11 hours straight, 27 opponents, no breaks, no sleep, 10lbs lighter, beaten, tortured, and I WALKED away.

So what was it like? Mentally, It was a weird lonely place to be and kind of hard to explain. It was tormenting and tiresome. The days after were excruciating. The fatigue was crushing.

The benefits however outweighed it all. $6375 was handed over to 11th-hour rescue. I am still getting messages and phone calls from people who felt inspired. I got to set another example for my 2 boys of what integrity looks like. My wife knows the extent I would go to for something or someone I love. My students can never complain about being tired again and I feel like I proved a whole lot to myself. I have come out of this with a new view on my life.

In closing, I would like to thank everyone who supported me and this event. Everyone who donated. My family and students.

Or their website. Tell them Sakura JiuJitsu sent ya:
https://www.ehrdogs.org/info/display?PageID=17333